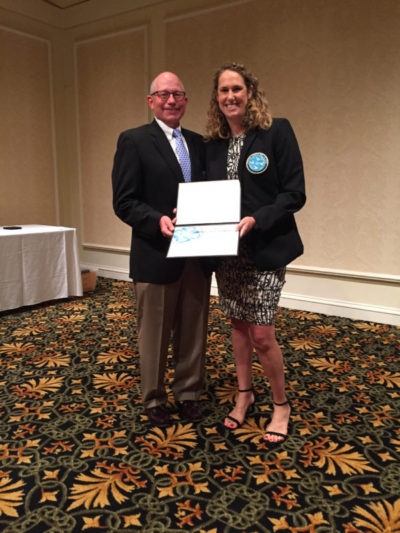 It was a special night for the Athens Bulldog Swim Club as former ABSC swimmer, Paige Wilson (now Paige Wilson Penze), was inducted into the Georgia Aquatic Hall of Fame as a member of the 2017 class. ABSC Head Coach Harvey Humphries was on hand to introduce his former swimmer at the ceremony.

The accomplished Wilson, who went on to swim for the University of Georgia after graduating from Clarke Central High School in Athens, entered the Hall of Fame with two other UGA swim and dive greats: current Head Diving Coach Dan Laak, and former NCAA All-American and American Record holder Elizabeth (Hill) Newman.

Wilson moved from Ohio to Athens, Ga at the beginning of High School. When she arrived, she had already achieved Junior National qualifying times. Coach Harvey was tasked with taking the talented swimmer to the next level in her swimming career.

At the age of 17, Paige became the first ever Olympic trials qualifier for the Athens Bulldog Swim Club! She also achieved several other awards and accomplishments while training with ABSC, including becoming a 4X High School All-American for Clarke Central, and setting state records in the 100 Backstroke in 1987, 1988, and 1989, and in the 100 butterfly in 1988 and 1989.

Not just a talented athlete, Wilson also experienced enormous success in the classroom. She was listed as an Academic All-American all four years in college, and went on to be named a Women’s NCAA Post-Graduate Scholar — an award achieved by only 30 female athletes, from any sport, across the entire NCAA each year — for her outstanding academic performance.

On the USA Swimming side of things, Paige continued to represent ABSC. Under ABSC’s banner, she went on to be a Long Course National Champion in the 200M backstroke and 100M fly in 1991, the 200M backstroke again in 1992, and the 200M butterfly in 1993. She would go on to compete in the World University Games and the Pan Pacific games in 1993, representing team USA on the international level.

Paige Wilson Penze’s legacy still lives on with ABSC today, as she is the namesake of the “Paige Wilson Award” which is offered every year at ABSC’s end-of-year awards ceremony. The winner of the award, which given to a member of our Senior 1 group every year, is voted upon by members of the Senior group and given to a peer who they deem to be an “excellent role model and outstanding team leader.”

Congratulations to Paige Wilson Penze for her induction into the Georgia Aquatic Hall of Fame, and may she continue to inspire our club for generations to come.

You can see the Georgia Aquatic Hall of Fame Website here: http://gahof.org/